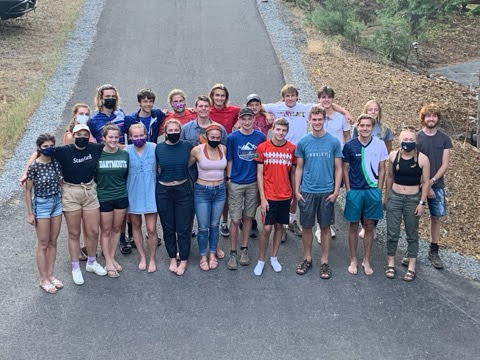 Delayed only 90 minutes and oh boy was the air clearer than for the middle. Certainly was still smoky, but nowhere near as bad.

It was a short drive for many of us, and as we had full cars we were able to drive right up to the arena where there was music blasting and lots of people preparing for their races. Some team members with much later starts had some fun with the giant pine cones, others of us arrived and began our warm-up right away.

I think it is safe to say that today was a whole lot more technical than the middle, and many people were tripped up by it. We did have some very awesome results from the juniors however – AJ won M21, Keegan was 7th, Daniel won M20, Andrew McLaren (our new Canadian junior friend) finished first in M18, and I (Bridget) won F20.  AJ’s result was particularly exciting because he beat former junior team coach Greg by only 41 seconds (you’ll get him next time Greg. Maybe…) Results linked here!

Me to the juniors: “One take away from today’s race, go”

Keegan: “Sometimes you need to do more than a compass bearing”

Luke: “The third leg was the longest and hardest.”

Diana: “Um, lets see. Sometimes going slow and making sure you know where you are can save you from making a very big mistake”

Jess: “Bro, my takeaway from today is evaluate all the possible options before committing to a route. Also, for long legs, your compass can’t be your only thing to rely on because there is a low chance you will actually hit the circle”

Max: “That’s not wet” (in reference to the dry river beds)

Bridget: “Training is helpful, especially for longs. Also, polyester uniform socks are a blister’s best friend (or worst enemy? Depends on how you look at it. They are very good at forming blisters that are then very painful…)”

Tyra: “Even when you can’t see people around you, you should still be racing and have good racing effort mentality.”

Siri: “Don’t wear shoes that give you blisters”

After the races all the juniors (team members, non-team members, and our one Canadian guest) got together to go over races, eat ice cream, and play some trivia. Split into teams of ~five, we worked through Youtube, Movies, TV Shows, video games, and the most fun: music. One witnessed the whispered discussions, stumped faces, and enthusiastic sing-a-longs. Eventually one team came out victorious: Obvious Joke, made up of Kirsten, Josh, Luke, Dylan, and Siri (congrats to them!).

Only one day left of racing, and one that, for many, is the most fun – relay time!!